Apathy shows an indifference that is intolerable, and the person who is apathetic is too lazy to care. Apathy results in lethargy and some of the worst crimes in history were allowed to occur on such a  large scale because of apathy. In Nazi Germany many citizens did not participate in the widespread slaughter of others on a personal level but they showed an apathy to what was happening and did nothing to stop it. Ignorance is excusable because the individual does not know any better while apathy is not, because the individual understands why something is wrong but does nothing to fix the problem and is indifferent to the outcome of the victim. Apathy allows evil to fester and grow, and when good people do nothing this provides the ideal environment for evil to breed and flourish. If apathy is eliminated the entire world would be a better place. It is better to take action even if the wrong action is chosen then to do nothing. 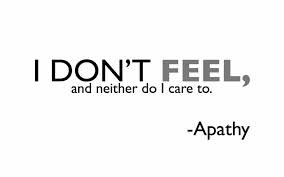