A young man who walked 20 miles to work in Alabama now has a new set of wheels. 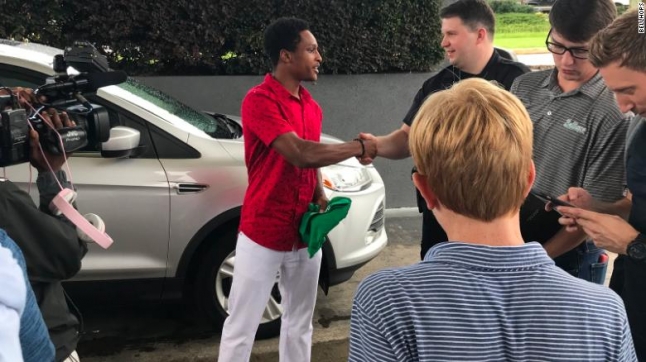 Walter Carr, a college student from Alabama, should be an inspiration to all of us. When his car broke down the night before his first day of a new job, he made the astonishing decision to walk all night to make it to his first day of work. This was 20 miles long and seven hours on foot, but he did not make it an option to not show up, because he needed this job.

Walter started his long journey at 11:40 P.M. and at 4:00 A.M. a police officer doing rounds in the area noticed Walter catching his breath, while sitting on the ground. Since it was so late the officer stopped to check on Walter, after less than a minute of hearing Walter’s story the officer was moved by Walter’s self-motivating attitude. The officer and two of his partners took Walter for breakfast and got him lunch to go, then took him to a church to rest up before he started his walk again.

After walking several hours again, another officer spotted Walter walking and drove him the rest of the way to the house he was meeting at to help move, because his new job was a moving company.

Walter made it to the home of Jenny Lamey early, where she insisted that Walter go upstairs to rest until the other movers arrived. Jenny was so moved by the story that Walter told her about his journey to her house, that she posted it on Facebook to share with her friends. Jenny said that she could not begin to imagine what was going through Walter’s head the entire walk, the whole time he could have wondered if it was even worth it walking this journey, but he still kept going.

When the CEO of the moving company ran across Jenny’s Facebook post, he was blown away by the determination of Walter. The CEO decided he wanted to do something about it, because the only thing standing in front of Walter and his hard-working abilities, was reliable transportation, so the CEO gave Walter his 2014 Ford Escape.

Jenny was still so moved at how much of a role model Walter was, that she started a GoFundMe page to raise $2,000 to help Walter out, so far, the page has received more than $11,000.

Walter is beyond appreciative at all the support he has received, and wants to thank everyone for taking the time to listen to his story.