A Young Girl Bullied For Her Skin Color, Turns The Hate Into Her Own Brand 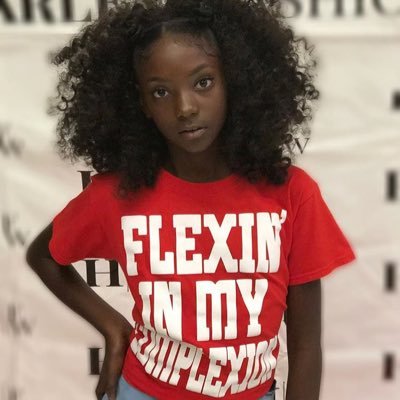 The epidemic of kids getting bullied in school is staggering, but this young girl turned the hate into a phenomenal business.

Kheris Rogers suffered humiliation throughout her grade school years as being the darkest kid in her class, and on top of that, when doing a drawing of themselves, the teacher handed her a black crayon without hesitation, instead of a brown crayon.

The 11-year-old girl said, "I was the darkest of all of them," referring to how all the other students were African American.

Kheris even went to the lengths to transfer to a different school to escapes the humiliation of being bullied because of her complexion, but again she was still a target.

Her grandmother was her strength during this time, giving her advice saying, "Flex in your complexion", which later became the name of her brand. This phrase reminded her just how beautiful she really is.

What started Kheris fame was when her and her sister started the hashtag #FlexinInHerComplexion on twitter with family photos, the response was beyond what they could have imagined, and also others came forward sharing their story about how they had dealt with similar bulling.

Celebrities even took notice to the amazing message being spread by this amazing young girl. Snoop Dogg and Lena Waithe shared their positive thoughts about her shirts, and Alicia Keys even reached out to Kheris to tell her that she bought a shirt.

Kheris went to fashion week and appeared on Steve Harvey’s show, to being on an ad for Nike.

"I went from being bullied for my skin tone to modeling at Nike headquarters. Ain't it a blessing?" Rogers tweeted in October of 2017.

Kheris cannot believe the support she has gotten.

You can participate in the movement by purchasing a shirt online, but Kheris hopes to expand her clothing to stores and has a dream to one day open her own store.