Tinashe is an American singer who also has many other talents, and who was a model at one time in her life. Tinashe was born on February 6, 1993 in Lexington, Kentucky, and she started her career in entertainment at the very young age of just 3 year old. The birth name for this rising star is Tinashe Jorgenson Kachingwe, and she is the eldest child of parents Michael and Aimie Kachingwe. Michael Kachingwe came from Zimbabwe and Aimie Kachingwe is a mix of Irish, Norwegian, and Danish heritage. Tinashe is Shona language for God is With Us, and Shona is a language that the artist speaks quite fluently. The multi talented model and musical artist has two younger brothers, and she moved to Los Angeles, California when Tinashe was 8. There are many fantastic Tinashe quotes, if you want to find some to browse through then visit the Look Up Quotes website here.

As a child Tinashe had some hardships, and she has confessed during interviews that she was the target of bullying when she was younger. Tinashe attended Crescenta Valley High School but she dropped out after a year so that she could pursue her dream of a full time musical career. When she was 4 years old the singer and dancer studied several varieties of dance, including tap, jazz, and ballet, and she had already started modeling at 3 years old. Tinashe continued to compete in dance competitions for the dance company until she turned 18 years old. If you want to find Tinashe quotes, or quotes from any other else, then go to lookupquotes.com. 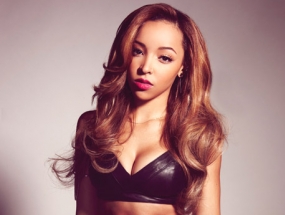