Lyfe Jennings, who was born as Chester Jermaine Jennings, is an American artist in the R&B and soul genres. Jennings was born in Toledo, Ohio on June 3, 1978, and he always had a fascination with music. Lyfe plays several different musical instruments including the piano, guitar, and bass. The artist is a singer, songwriter, instrumentalist, and record producer. Lyfe Jennings did not have an easy childhood, and he used these early experiences as inspirational ideas for his music and the songs that he wrote. According to the New York Times the artist is a socially minded R&B singer. If you want to look at some of the quotes from songs that this artist has written or performed then the Look Up Quotes website here will help you search for and locate these quotes in almost no time.

When he was young Lyfe Jennings lost his father, and that had an impact on him. Then when Jennings was only 14 years old he was convicted of arson and sent to prison to serve a 10 year term, and the artist credits his decade in prison for turning his life around. Prison helped Jennings to rekindle a faith in god that was previously lost, and it gave the artist plenty of time to work on his music and perfect his methods and techniques. The debut album by Lyfe Jennings has the numbers 268-192 attached at the end, and this was his inmate number while in prison. Lyfe Jennings quotes about many topics, as well as quotes from many others, can be found at lookupquotes.com. 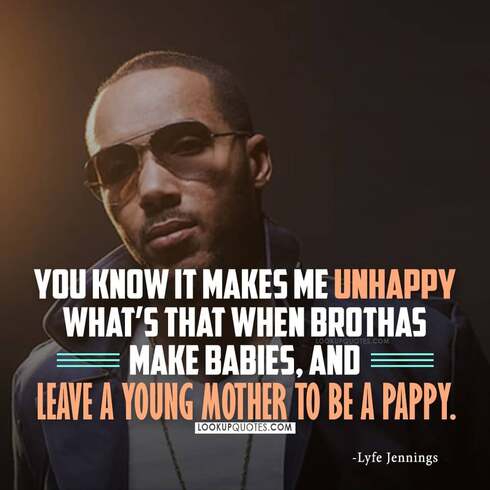