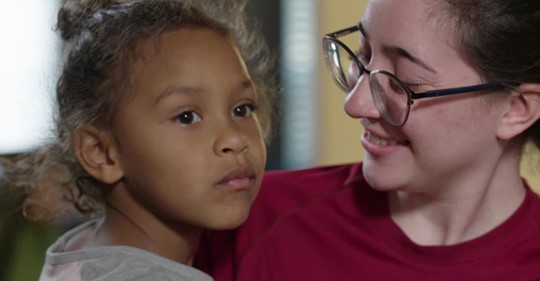 Skylin Jamrowski and her brother and sister are now orphans after the El Paso shooter killer takes the lives of their parents.

Jordan Anchondo, is Skylin's step-father, but she called him her dad.

The police believe that the parents were shot due to the shooter targeting immigrant Hispanics.

The family was worried when they heard the news about the shooting that happened at Walmart, and was searching to figure out if their family was in this shooting. 22 people were killed, and two dozen people were injured.

Skylin is 5 years old and is the youngest of the three children, and the family had a heavy heart having to tell her that her parents were dead. Her heart was broken and with tears in her eyes she asked, “Is he going to come and shoot me?”

Luckily Skylin has a strong family support system that has been giving her and her siblings love. The little baby brother Paul was in his mother’s arms when the shooting happened. His mother shielded Jordan, who was holding baby Jordan, but the bullet when through her and hit Jordan injuring him, the dad was hit by the bullet also trying to protect them both. Luckily Jordan survived, but he was injured.

The family is heartbroken for the children because although they have a big circle of a loving family, nothing can replace mom and dad.

The parents were getting school supplies for Skylin, because she is starting kindergarten. Skylin was in cheerleading practice when the shooting took place.

It’s sad that this young child already has experienced the cruel things that can happen in this world.

The family has focused on keeping to their faith and love; and has forgiven the shooter.

“We forgive him. We honestly forgive him,” said Misti Jamrowski. “We pray for him. We hope that he finds God because God teaches you to be loving.”